How to start a Record
The Record Panel

Press "Stop" when you done

When pressed "Play", a green border will will wrap around your screen. This indicate that the app is ready to record your touch. The app will relay any actions that you've done immediately.

Only touch the screen when the border is visible.

You can press the red button in the lower left corner to pause the recording. Pressing "Play" again will resume to where you left off. 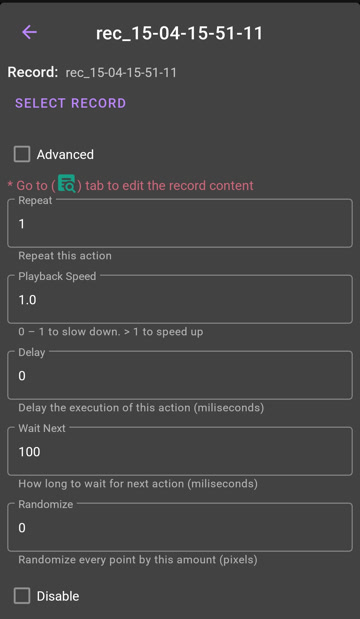 A Record is just like a cd record, it can not play by itself. In order to play a Record you need to use the Play Record action.

Select the Record you want to play. You can control the Playback speed, how many times to Repeat, Delay and even Randomize every touchs in that Record.

Playing is a seperate action so you can play a record from any place, in any order.

If you start the recording using Method 1 from any Group that support a Play Record. A Play Record is automatically created for you in that Group.

A Record is saved in Resources . You can edit the Record freely like any other Group

When the app scan the current working Group. If it encounters a Play Record then it'll render the content of that Record on the screen. If two or more Play Record is next to each other, the record content will be rendered multiple times thus you will see them overlapping each other, changing one will change others since it points to the same record. See this for how to avoid that.

Note for advanced user: This is what happen when you record in a freshly created macro: The default working group is Main, after recording, a Record is saved to the Resources. Because Main group support Play Record, the app automatically create a Play Record in Main. The app rescan the Main group and found a new Play Record action, it then look for the Record in Resources and render its content out. This automatic creation of the Play Record provide the seamless experience after recording but it's important to know that the content is kept in seperate place and the Play Record is a delegate to that.

Because record is saved separately. When edit record content, you need to save the macro for changes to take effect, otherwise it'll read data from old files.