On Success, On Fail, Loop settings are the same. The differences are how you construct the condition (multiple detections) and the action to take.

Using the icon in Bottombar. 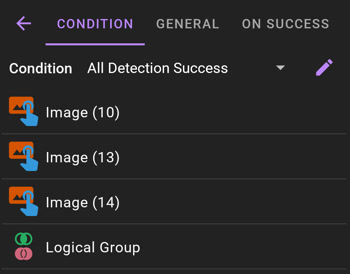 Condition is formed by multiple detections or Logical Group and they can be added from the Bottombar.

A detection inside a Multi Detection will have some options removed. Timeout, Scan Rate, Loop is no longer settable as this might cause one detection stuck if not set properly.

On Success, On Fail for individual detection still work but only Wait, Variable Set and Code block are available. Other actions might cause side effect (a click might change the screen) so they are removed. 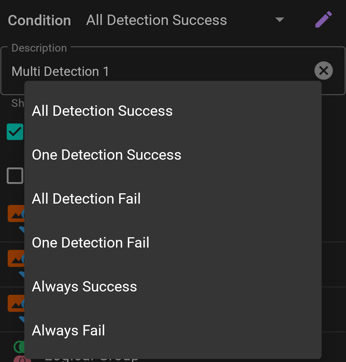 You can set the Logic for each Logical Group. This will determine if the Group is Success or not. There are 6 Logic total:

Logical Group can be nested inside another Logical Group. This allow you to combine logic to create a more complex logic

For example to create the logic "(Detection 1 or 2 succeeds) and (Detection 3 or 4 succeeds)".

All logics are Short-circuit.

For example if we have 4 detections inside All Detection Success logic, the 2nd detection fails then detection 3 and 4 will be skipped and the group will be evaluated to fail.

You can choose to disable this behavior with Disable Short-circuit option. With the above example, detection 3 and 4 will run, the group will still be evaluated to fail regardless of their results.

These are the same as Single Detection

On Success, On Fail, Loop

These are the same as Single Detection 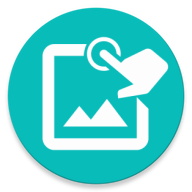